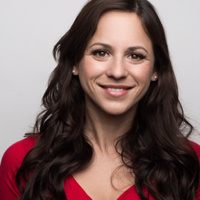 Gabriela Garcia Medina is a poet/spoken word artist who utilizes the mediums of Film, Poetry, Spoken Word, Theater, and Performance Art to address issues of identity and social injustice (often through the use of humor, comedy and lightheartedness). Gabriela is a 2016 Hedgebrook Screenwriting Fellow, a Poet Laureate Nominee for the City of Los Angeles (2013). Gabriela has performed her spoken word poetry at over 800 Colleges and Universities across the United States. Internationally she has been invited to perform her spoken word poetry at the Havana Jazz Festival (2003), the World Social Forum, Brazil (2005), Her one-woman show was the best selling act on the US National College circuit from 2007-2011, and has had a run at the Redcat Theater in Los Angeles, the Yale Peabody Museum, and Casa 0101 Theater. Her poems have appeared on commercials for Dove, Coca Cola and Toyota, and Gabriela’s spoken word has opened the stage for artists and influential figures such as Black Eyed Peas, Pitbull, Eva Longoria, Kamala Harris, Barrack Obama, Hillary Clinton, Mayor Villaraigosa, Deepak Chopra, and Thich Nhat Hahn. She has taught Poetry, Spoken Word and creative writing at Emory University in Atlanta, GA (2016).