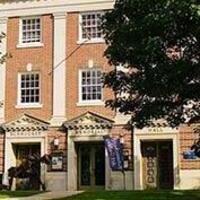 Through paintings, prints and works on paper, Andrew Ellis Johnson and Susanne Slavick examine the contradictory fears and hypocrisies, ignored histories and punitive policies surrounding the challenge of migrants and refugees today. They consider the natural fear of the unknown, shared by the vulnerable and those made to feel vulnerable, asking viewers to entertain how easily the vanquished are demonized into a formidable foe by the rhetoric of demagogues and the media that  serves them. Claims of invasion and infestation persist despite the evidence. The “other” is imagined as larger than life—and worse, fueling the dangerous idea that “the thing that is lower than I, makes me bigger.”

According to the artists, such assumptions and attitudes insist that is not enough to be strong; those perceived as weak and powerless must be punished with deportation, incarceration, and separation from those they love. They must be dehumanized and denied rights to asylum and autonomy. They must remain invisible. The works in Getting There question these manufactured imperatives and expose the consequences of our resentment or fear of “the stranger.” Getting There is not just about the movement and reception of migrants; it is also about the movement of our own consciences.

Susanne Slavick is an artist, curator and the Andrew W. Mellon Professor of Art at Carnegie Mellon University. Some of her curatorial projects include, Marx@200, that featured 40 contemporary artists addressing Marx's critique of capitalism and Unloaded, a touring multimedia group show that explores historical and social issues surrounding the availability, use, and impact of guns in our culture. Her curatorial book project Out of Rubble (Charta, 2011) became a traveling exhibit that featured international artists responding to the aftermath of war. She has exhibited internationally, with more recent solo shows at the Chicago Cultural
Center, McDonough Museum in Youngstown, Accola Griefen Gallery in New York, and Bernstein Gallery at Princeton University. Slavick graduated from Yale University, and subsequently studied at Jagiellonian University in Krakow, earning her MFA at Tyler School of Art at Temple University in Rome and Philadelphia.

Andrew Ellis Johnson is an artist whose work has appeared in galleries, festivals, public collaborations, conferences, and publications in the Americas, Europe, Asia and the Middle East. He has performed as co-founder of the collective PED in Buffalo, Belfast, Chongqing, Rio de Schmucker Art Gallery Calendar 2019-20 2 Janeiro, St. John’s, and Toronto. He studied at the School of the Art Institute of Chicago (BFA) and Carnegie Mellon University (MFA) in Pittsburgh, where he is Associate Professor of Art. Residencies and exchanges over the last decade include those at Korean National University of the Arts, Seoul; University of the Arts London, Camberwell; Fayoum International Art Center, Egypt, and Sites of Passage in Jerusalem/Ramallah/Pittsburgh.

This exhibition is supported in part by the Interdisciplinary Studies Program, Peace and Justice Studies, and EPACC, Gettysburg College, and the College of Fine Arts at Carnegie Mellon University.