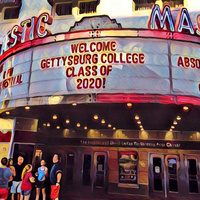 Event Title: LuceOrganization: MAJESTIC THEATER LIVE EVENTSEvent Image URL: www.gettysburgmajestic.org/global/im...es/luce_thumbnail.jpg?language_id=1A married couple is forced to reckon with their idealized image of their son, adopted from war-torn Eritrea, after an alarming discovery by a devoted high school teacher threatens his status as an all-star student.


A smart psychological thriller that will leave audiences breathless. An all-star high school athlete and accomplished debater, Luce is a poster boy for the new American Dream. As are his parents, who adopted him from a war-torn country a decade earlier. When Luce's teacher makes a shocking discovery in his locker, Luce's stellar reputation is called into question. But is he really at fault, or is Ms. Wilson preying on dangerous stereotypes?

This film is rated R (for language throughout, sexual content, nudity and some drug use).