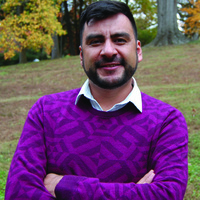 La Noche Mexicana and the Staging of a Festive Mexico

“La Noche Mexicana,” a massive fiesta celebration during the centennial festivities of Mexican Independence in 1921, recreated regional “ferias” featuring both indigenous and mestizo dances from all over the country in Mexico’s Chapultepec Park. In this talk, Dr. Cuellar looks at how an image—or rather imagery—of a festive Mexico emerged not only discursively, but also corporeally, gesturing towards the importance of movement for the configuration of a shared cultural background in Mexico.

Manuel Ricardo Cuellar is an assistant professor of Spanish and Latin American Literatures and Cultures, and an Affiliated Faculty of the Women’s, Gender, and Sexuality Studies Program and the Honey W. Nashman Center for Civic Engagement and Public Service at The George Washington University. His research and teaching focus on Mexican literary and cultural studies with an emphasis on race, gender, and sexuality. Dr. Cuellar’s scholarship combines ethnographic fieldwork, archival research, and studies of contemporary and classical Nahuatl, Mexico’s most widely spoken and written indigenous language. Another area of related interest, reflected explicitly in his teaching, is US Latina/o/x Studies with a focus on community-engaged learning. For over 20 years, Dr. Cuellar has been a practitioner of Mexican folklórico dance, as an instructor and performer, and he is currently part of D.C.’s Corazón Folklórico Dance Company. Dr. Cuellar’s strong background in Mexican traditional dance has inspired him to explore dance’s role in Mexican national identity, indigeneity, and queerness. His current book manuscript, tentatively titled Performing a Festive Mexico: Choreographies and Dancing Histories of a Nation, studies how written, photographic, cinematographic, and choreographic renderings of a festive Mexico highlight the role that dance has played in processes of citizen formation and national belonging, from the late Porfirian regime to the immediate post-revolutionary era (1910-1940).