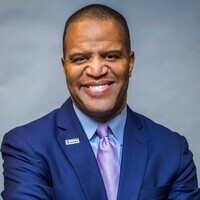 Join award-winning social entrepreneur and philanthropist, John Hope Bryant, at Gettysburg College as he connects the Reconstruction era economic inclusion work of Abraham Lincoln to how entrepreneurial thinking can change the world by solving real social problems – one person at a time – through the “Power of Doing”.

About John Hope Bryant:
American Banker 2016 “Innovator of the Year”, John Hope Bryant, is an entrepreneur, author, philanthropist, and prominent thought leader on financial inclusion, economic empowerment, and financial dignity. Bryant is the founder, chairman, and chief executive officer of Operation HOPE, Inc.; and chairman and chief executive officer of Bryant Group Ventures, and The Promise Homes Company, the largest for-profit minority-controlled owners of institutional-quality, single-family residential rental homes in the U.S. His work has been recognized by the last five U.S. presidents, and he has served as an advisor to the last three sitting U.S. presidents. He is responsible for financial literacy becoming the policy of the U.S. federal government. In January 2016, Bryant became the only private American citizen to inspire the renaming of a building on the White House campus, when the U.S. Treasury Annex Building was renamed the Freedman’s Bank Building. Founded by President Abraham Lincoln, the legacy of the Freedman’s Bank has become the narrative of the work of Operation HOPE—to help all people in the ‘Invisible Class’ become fully integrated into our nation’s economy. Bryant has been recognized as one of Atlanta’s Most Admired CEOs 2018 by the Atlanta Business Chronicle. His latest book, The Memo: Five Rules for Your Economic Liberation (Berrett-Koehler, September 2017), debuted as the #1 new release in budgeting and money management on Amazon.

Funding for this presentation is provided by the Hanson Lecture Series through the Foundation for Enhancing Communities.