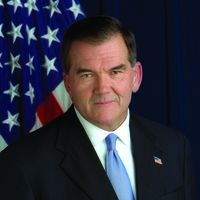 Following the tragic events of September 11, 2001, Thomas (Tom) Ridge became the first Director of the Office of Homeland Security. On January 24, 2003, Ridge became the first Secretary of the U.S. Department of Homeland Security. During his tenure, Ridge worked to strengthen our borders, provide for intelligence analysis and infrastructure protection, improve the use of science and technology to counter weapons of mass destruction, and create a comprehensive response and recovery division. Tom Ridge served as the nation’s first Secretary of Homeland Security until February 1, 2005. Ridge was twice elected Governor of Pennsylvania, serving from 1995 to 2001. Governor Ridge's aggressive technology strategy helped fuel the state's advances in the priority areas of economic development, education, health, and the environment.

This event is free and open to the public.