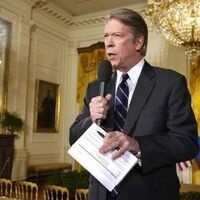 Major Elliott Garrett is currently Chief Washington Correspondent for CBS News, overseeing all coverage related to the presidency, Congress, and the Supreme Court.  He has covered the last four administrations, including the presidencies of Clinton, Bush, Obama, and Trump as the Chief White House correspondent for CBS News.  Mr. Garrett has a weekly podcast with CBS News and is a correspondent at large for the National Journal.  He is often seen on CNN and MSNBC discussing current political issues.

Major Garrett will discuss his most recent book: Mr. Trump's Wild Ride: The Thrills, Chills, Screams, and Occasional Blackouts of an Extraordinary Presidency.  Following this presentation, Garrett will respond to audience questions in a session moderated by Fielding Fellows.

The event is free and open to the public.