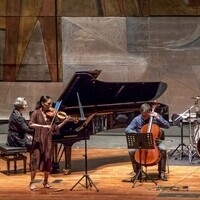 Eighth Blackbird moves music forward through innovative performance, advocacy for music by living composers, and its legacy of guiding an emerging generation of musicians. Hailed as “one of the smartest, most dynamic contemporary classical ensembles on the planet” by the Chicago Tribune, Eighth Blackbird began in 1996 as a group of six entrepreneurial Oberlin Conservatory students and continues today under the leadership of founding members Lisa Kaplan, executive director, and Matthew Duvall, artistic director. The group has won four Grammy Awards and become “a brand-name defined by adventure, vibrancy, and quality” (Detroit Free Press).

In addition to its Grammy Awards, Eighth Blackbird’s many honors include winning the 1998 Concert Artists Guild Competition, the prestigious MacArthur Award for Creative and Effective Institutions, Chamber Music America’s inaugural Visionary Award, and was named Musical America’s 2017 Ensemble of the Year. They also pioneered a year-long residency at the Museum of Contemporary Art Chicago in 2016, during which the ensemble served as a living installation with open rehearsals, performances, guest artists, and public talks.

Eighth Blackbird has commissioned and premiered hundreds of works by established and emerging composers, including Steve Reich’s Pulitzer Prize-winning Double Sextet. Through performances in its Chicago home base and performances across the U.S. and around the world, Eighth Blackbird has brought innovative presentations of works by living composers to tens of thousands of music lovers.